← Three Generations of Chaplains
2018: The Chaplain Kit in Review → 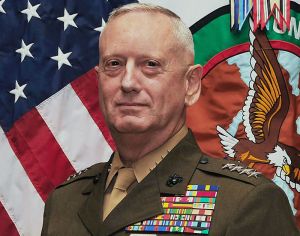 With the recent retirement of Secretary Mattis (General, “Mad Dog,” retired) everyone seems to be posting their stories about him so I thought I would add mine to the mix, from a chaplain’s perspective.

I was the Battalion Chaplain for the 25th Signal Battalion from July 2006 to July 2007. The 25th’s headquarters was in Qatar and they had companies in Bagram, Kandahar and two locations in Kabul, Afghanistan, so I did a lot of traveling to visit my troops (over 50,000 miles in the year I was there).

Since I traveled so much, I learned the ins and outs of getting good transportation from Qatar to Afghanistan and back. Sometimes I would fly a contracted flight with Blackwater or other contractors. My favorite was hitching a ride on the Marine’s Learjet that had daily flights to Afghanistan and back to be ready for VIPs. Usually, though, I got a ride on one of the Air Force’s C-17s which was much faster and more comfortable than their C-130s which I tried to avoid at all costs. The C-130 was notoriously hot and uncomfortable and was slower (being a prop plane) than the C-17 (being a jet). The difference between the C-17 and C-130 was 2.5 to 3 hours in additional flight time from Qatar to Afghanistan.

Troops from my battalion traveling from Kuwait to Iraq on a C-130 during a later deployment in 2008 (author’s photo).

The back of the C-130 had seats along the sides of the fuselage facing inward with a row down the middle with back-to-back seats facing out. I and a few other soldiers (read: Army) were on one side and there were a few Marines on the other. We all knew we were in for a long, uncomfortable flight because we had the unfortunate lot of having to fly on a C-130.

When we arrived in Bagram, Afghanistan, we grabbed our “carry-on” ruck, tossed it over our shoulder and headed out of the back of the plane to the terminal to get our “checked” duffle bags. On my way out of the plane, I saw one of the Marines talking to another on the flight line and noticed stars on his collar so I circled around to see the name and noticed it was General Mattis who, at the time, was the commander of the 1 Marine Expeditionary Force.

What struck me most on this, my one encounter with General Mattis, was that instead of flying on the Marine’s Learjet or waiting for a C-17 for a more comfortable flight, or even requesting the jumpseat up on the flight deck of the C-130, which is a little more comfortable than the other seats (which I often tried to get), he rode in the back of the C-130 with the other Marines travelling with him. He endured the hot, uncomfortable flight, not using his rank or position to be more comfortable. That spoke volumes to me about leadership and as I have learned more about him over the last couple of years while he has been Secretary of Defense, it fits right into the kind of man he is.

← Three Generations of Chaplains
2018: The Chaplain Kit in Review →