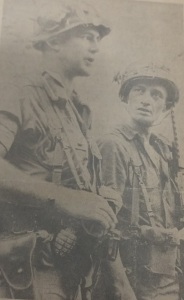 “Capt. Curtis Bowers, 33, Lancaster, Pa., looks the part of the fighting minister he has been dubbed by the men of the 1st Battalion of the 327th Infantry. The battalion is one of three in the Screaming Eagles, the 101st Airborne Brigade, stationed in Viet Nam.

“His face is a mixture of choirboy innocence and the ruggedness of a battle-hardened paratroop company commander.

“So far the Church of the Nazarene minister has accompanied the battalion on every major operation in Viet Nam as well as tagging along on many company and platoon-size actions.

“The 45-caliber pistol and fragmentation grenade hung on his pistol belt?

“I don’t want to be a drag when the going is hot and heavy. I ought to be able to earn my own keep with these men. But I would only use these things in self-defense–my job is to save souls and not to take lives.

“Although most of them don’t, chaplains carrying arms in Viet Nam represent a reality in a war where a peaceful-seeming bit of jungle or rubber plantation can erupt in bloody hand-to-hand fighting without warning.

“Like other officers, Chaplain Bowers turns his collar under in the field so his rank cannot be spotted by a sniper.

“During a recent operation eight miles northwest of here, Chaplain Bowers was touring the perimeter chatting with the troops when the vicious snapping of Viet Cong automatic weapons filled the air around his head.

“He hit the dirt behind a tree and moments later continued his rounds.

“Bowers, whose wife, Doris, and their three children live in Lexington, Ky., says the job of helping the men of his battalion meet the realities of war is the most challenging he could imagine.

“When we first came, the men’s biggest worry was whether a Christian could kill and still be a good Christian. Most have settled this for themselves now.

“Lately they are worried about their families if they get that telegram Defense Department notification of next of kin in case of death or wound.

“After the initial rounds of sniper fire by the Viet Cong following the heliborne assault, the operation became a job of routine and mostly uneventful sweeping the area.

“You know, I’m glad it was a cold unopposed landing today. I prayed it wouldn’t be a bad day for the battalion or the families.”

The above article was written by John T. Wheeler and published in an unidentified or dated newspaper clipping contemporary with the Vietnam War, located at the Warhawk Air Museum in Nampa, Idaho. The uncredited photo appeared with the article.