This kit was used by Senior Chaplain Brian Rayner from November 2001 to April 2002 on board HMAS Kanimbla during Operation Slipper in the Persian Gulf. Interesting that it the same kit U.S. chaplains used in an earlier era. (Photo from http://www.awm.gov.au/collection/REL30454/)

Because of the number of kits from the United Kingdom’s history (England, Britain, Scotland, Wales, Northern Ireland, etc.), they can be found on their own page, United Kingdom Kits.

A WW1 French chaplain’s gear to include his chaplain kit, 1916 (photos from Histoiremilitaria 14-18). 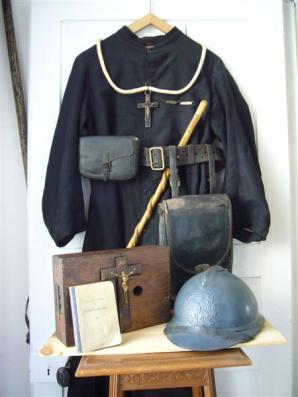 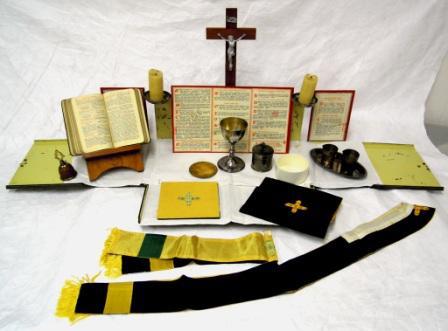 I just (July 2017) received a Swiss Protestant Field Worship kit. I’m not sure of the years it was used, it appears modern (and is in near-new condition) but the included Bible is dated 1966 and the Liturgy book is dated 1953, both which appear to have been included with the kit so it’s no older than 1966 and likely a bit newer (author’s collection):

It is an ingenious design, all being contained in a wooden outer box which protects the inner metal case (with a leather handle). Inside the metal case are several more metal boxes and tubes of varying sizes which protect the contents. Here are a few pictures of the way it gets packed up: 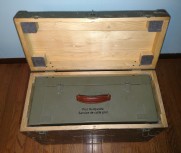 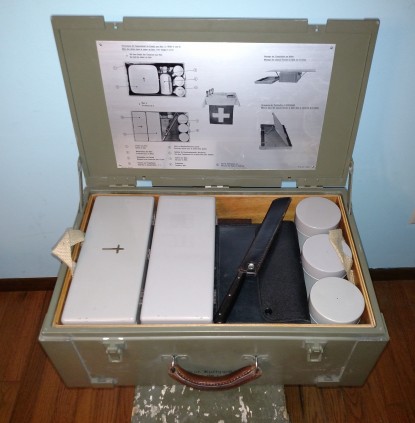 Once open, inside the lid of the inner metal box are pieces that attach to the metal box, when closed, to form the altar: 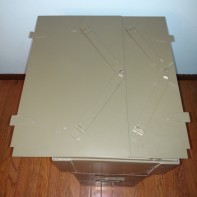 According to the diagram under the cover, the altar set-up includes a large square bread plate, three chalices, the Bible with Bible stand, and the appropriate purificators: 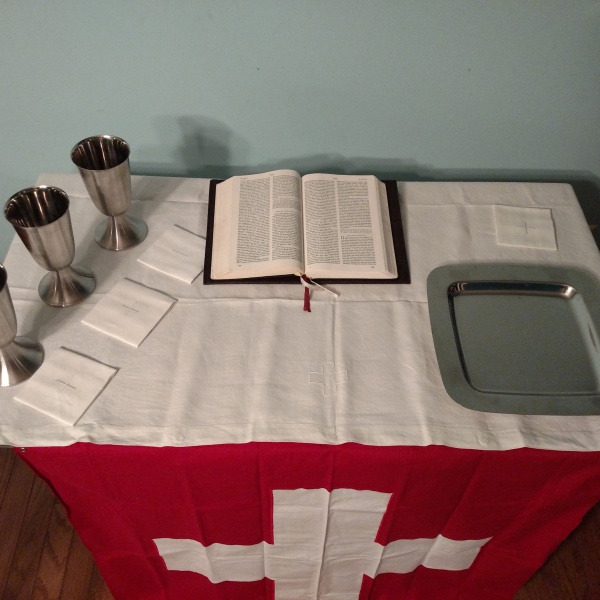 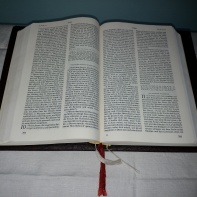 The chalices are stored in a soft cloth pouch inside of a metal tube:

There’s a rectangular metal box that holds the purificators, altar cover and flag: 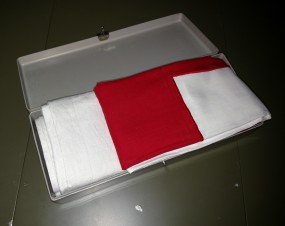 There’s another rectangular box with a cross on the lid that appears to be for hospital, brig or other individual visitation. It has two small chalices, a ciborium and a small plastic bottle.

A larger, square metal box holds the square bread plate on top, leaving room for bread underneath. This is likely not the wafers or crackers American Soldiers receive but rather baked loaves of bread since the kit also comes with a bread knife!:

Finally, there are two books included, stored in a leather (-like) case, a Bible and a Liturgy book: 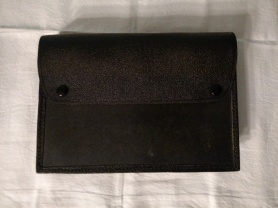 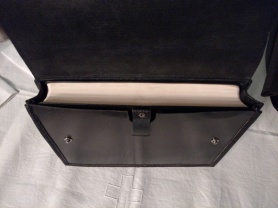 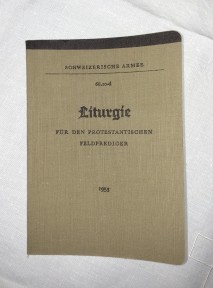 Set-up and storage are illustrated and explained in German and French on a panel inside the cover: