Chaplain Black was the first Seventh Day Adventist chaplain to serve as a Navy Chief of Chaplains and Chaplain of the U.S. Senate. 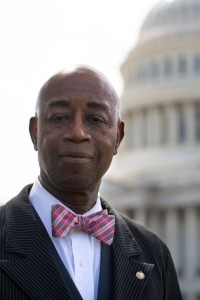 “Chaplain Black is a native of Baltimore, Maryland and an alumnus of Oakwood College, Andrews University, North Carolina Central University, Eastern Baptist Seminary, Salve Regina University, and United States International University. In addition to earning Master of Arts degrees in Divinity, Counseling, and Management, he has received a Doctorate degree in Ministry and a Doctor of Philosophy degree in Psychology.

“Chaplain Black has been selected for many outstanding achievements. Of particular note, he was chosen from 127 nominees for the 1995 NAACP Renowned Service Award for his contribution to equal opportunity and civil rights. He also received the 2002 Benjamin Elijah Mays Distinguished Leadership Award from The Morehouse School of Religion.  In 2004, the Old Dominion University chapter of the NAACP conferred on him the Image Award, “Reaffirming the Dream — Realizing the Vision” for military excellence.”1

Chaplain Powell entered the Army Chaplaincy in 1952, as the first African-American endorsed by the Seventh Day Adventist Church.

“Powell entered his ministry as dean of boys at Pine Forge Academy in Pennsylvania in 1947 to 1952. During this time he completed his Bachelors of Divinity degree at Washington Theological Seminary (now the Seventh-day Adventist Theological Seminary.)

“Upon entering the U.S. Army as the first African-American Adventist chaplain in 1952, Powell was posted almost immediately to Korea where he served in a evacuation hospital. He gave character guidance lectures and conducted worship services at the camp stockade and hospital, as well as the Korean Union Mission compound. He spent many hours in hospital visitation and also worked at an orphanage for blind children.

“Between active duty postings in the Korea and Vietnam conflicts, Powell served as a young pastor in North Carolina. Powell helped Martin Luther King, Jr. organize sit-ins at local restaurants and integrate public school, and he worked tirelessly to promote equality and justice for people in the Durham community…

“Powell retired from the Army in 1975. He entered a new phase of ministry as a chaplain and an assistant professor of religion at Oakwood. Later in his career, he also pastored in Los Angeles, California..

“Powell’s ministry was noted for his dedication and excellence. [According to Lt. Col. Bill Howe, Armed Forces Day leader,] ‘Powell set the standard for outstanding. He is respected and loved by everyone.'”1

Photo of Chaplain Powell is from a period slide in The Chaplain Kit archives.