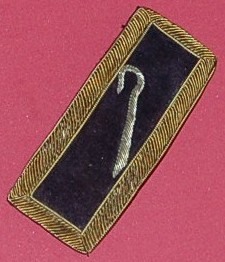 “The shepherd’s crook of frosted silver on a shoulder strap of black velvet was authorized in 1880 by General Order No. 10…

“General Order No. 169 of 1907 [prescribed that] on the olive drab and khaki coats a bronze cross was to be worn in place of insignia of rank, and a silver cross on the white coat…

“On 15 August 1917 Special Regulations 41 and 42 made the silver cross the badge of the chaplaincy for all uniforms and placed it on the coat collar where other officers wore insignia of branch. This implied that chaplains should wear insignia of rank in the same manner as other officers…” (Honeywell, pg. 157).

WW1 Chaplain W. T. Baucom, prior to the insignia change of May 1918

In May 1918 the War Department published regulations implementing the recommendations made by General Pershing in a cable to the Secretary of War in March 1918 which removed insignia of rank from chaplains’ uniforms and moved the silver Latin cross from the collar to the shoulder loop, though some chaplains “ignored the order and continued to wear the insignia” (Stover, pg. 205).

Honeywell, Roy J. Chaplains of the United States Army. Washington, D.C.: Office of the Chief of Chaplains, Department of the Army, 1958.