Told by the Padre-‘Off Duty’

(Monsignor Bickerstaffe-Drew, Chaplain to the Forces)

BEHIND the line -far behind the line- the Norman sea-port, crouched in a rift of the white rampart of tall cliffs, was full of English soldiers. There was no French garrison, though there was a depot of Belgian troops, but the whole town was crowded with hospitals for French wounded, and, of afternoons, one met their convalescents everywhere.

The coast-line facing England was so like ours that one could not but believe in a prehistoric day when between these coasts no dividing channel lay. And the downlands, topping the white walls of chalk were like our Sussex Downs. Turning inland from the falaises to a hamlet, cowering in its twisted combe from the north-east winds, one could scarce help a sense of surprise to hear French in the mouths of the stocky, grey-eyed fisherfolk and peasants.

SOMETIMES, in the sunny, windy afternoons of those March days, the English chaplain (only here for a few weeks) would walk along the ragged strand under the high, staring, white falaises. But he liked the downs at the top of them better; the great height above the sea gave a wider outlook and made them more cheerful, and the walking was more pleasant, for down below between cliff and tide there lay no stretch of smooth sand, but a floor of rock, sharp and uneven. At the top, close to the brink of the precipice, ran a level path, often broken and interrupted for a dozen feet, where rain and frost had rotted out a bulk of chalk and hurled it down to the shore. In one place a stile, held up -and not to be so held up for long- only by the posts on its landward side, hung out over the cliff’s edge. Yet, in the direction of the town, the path still ran up to within a few inches of it. On the other side three yards of the path had gone down.

ON one of those afternoons of brisk gale and bright but chill sunshine, the English priest was walking by the strand, intending to come back by the way above, towards the hamlet we may call Port-au-Vent, consisting of a score of fishermen’s cabins, a double score of summer villas, all shut up now, and a huge hotel, now a hospital for French wounded.

Here and there, close to the sea, one of these men (perhaps half a dozen altogether) was groping among the rock-pools for mussels. Those solitary dark figures made the loneliness seem greater instead of mitigating it. Except for the whistle of the wind and the long sad lisp of the tide, far out, there was no sound.

Turning a corner of jutting rock the priest saw, a hundred yards ahead, a dark bundle lying motionless, shapeless at the cliff’s foot-shapeless, yet with a vague suggestion of ghastly shape, as if it might have had a man’s battered out of it now for ever; as if it might have been a man who had walked, in the treacherous dark, along that intercepted path high above, had come to the stile, groped through it, and fallen sheer down to become yonder crushed heap of ruin.

NAY, there came a colder thrust of suggestion than that of accident, for the priest had, that very morning, heard of a horrible thing. In one of the hospitals there had been last night a lad already three times wounded, twice sent back to the front, and now here wounded a third time, seriously, in the head; a lad of frail body and sickly mind–nerve-ridden, yet patched up, declared cured, and passed fit to return to what he had twice before gone back to. I suppose that, throughout those slow weeks of patching up, the youth had lain staring at the picture of what must come soon again, when he should be called well enough.

Yesterday the word was passed that he was well enough; to-day he was to go to the front again. But he never went. He went, of his own stumbling will, a longer, more desolate journey; alone, friendless, unbidden, headlong, blind, he had turned from the hard path of duty and honour, and rushed scared from the dread of death to death itself. Dead by his own hand they had found him when, that morning, they had come to waken him to accoutre himself for his return to battle. Thinking of this, as he had been thinking of it all day, the priest hurried on, with dread, to where the shapeless, dark bundle lay huddled under the cliffs.

IT was but a tangle of seaweed twisted about with a long rag of sodden, tawny sail-cloth. To find it such gave a sense of relief, as from a threatened disaster averted. Yet the memory of that dead lad stuck the closer for the few minutes of uncertainty. He was dead, anyway, and yesterday alive; his poor book of life torn, scrabbled, fouled in its preface, that patience might have written full to a noble finis of duty and achievement. Might it not have been? Might it all have been different by interposition of some little “accidental” thing? A voice of kindness and hope in those hopeless cars, a comrade touch on that reckless arm? Over and over this unavailing question ached in the sad priest’s mind as he walked, with a fleeing haste, along the strand away from the unsightly suggestion of that bundle. It still throbbed like a pulse in his head as he clambered the steep zigzig to the path high overhead.

EVEN the wide, open spaces on the cliff-top seemed hard-hearted, callous; the stare of cold light, the glee of the wind at play, all pitiless, dry of sympathy, indifferent.

Presently, as he walked, hurrying on, the priest became aware of a lad at a queer play. His back was turned, and he would run, make a long leap, run again, make another, and run on again, sometimes falling as he overleaped his skill. At first he ran parallel with the cliff’s edge, a dozen yards from it; then he changed, ran inland, turned, and began making his insane leaps outwards towards the brink beneath which lay the strand. Each time, after running landwards, when he turned he seemed getting nearer in his jump to the edge of the precipice. It was a ghastly play and loathsome to watch. Had it any meaning? Or was it more apish sport–a parody of danger?

At any time it must have been grotesque and ugly to see. To-day the priest’s surmise was all turned to suspicion. Could it mean that? It might, and it might not. Hurrying on, he came much nearer, and hurrying still he kept to the path along which, as he knew, just in a dip, lay a broken stretch of it. He feigned often to be peering over his shoulder seawards, as he hastened on. The lad had run landwards, turned, saw him, and came running, calling out a warning as he ran.

IF the priest’s suspicion had been no libel how odd this showing of the instinct of human charity being stronger than the inhuman absence of pity for himself.

“Monsieur!” shouted the lad, still hurrying forwards. “Faites attention! Take care, the path fails there. You do not know where you are hurrying!”

The youth was close to him, breathless, not from haste alone, but from anxiety. Surely God owns us all, and we are, in spite of all, God’s men still, and not the devil’s.

The lad might be two-and-twenty, but of a meagre, boyish slimness, not a strong frame ever, and worn down, attenuated. The face handsome as to feature, but ignobled, with sharp, shrewd lettering of dissipation scored on it. The eyes bright and clear enough, but without softness, ungentle, selfish. Yet there was the miracle of his caring for a stranger’s life more than for his own. Shyness, reserve, the decency of not thrusting into another’s secret, at another time these night–almost surely would–have made the poor priest helpless, useless. The asking of that question in his mind as to the other lad, made him to-day cast all these decencies of habit to the wind like shreds of silly paper. What is tact, reticence, to a life?

HE spoke though what he said I cannot tell you, out straight from the vehemence of his dread, and speaking, he could scarcely frame words for the tremble of his lips the clutch in his throat, the choke of heart. Who can weep and speak? He loathed the tears that made his talk a mere sobbing, but they would not stay unshed. The sight of them disconcerted the lad who saw them coming. His own hard eyes blurred and grew gentler.

“You care!” he cried out in amaze. No answer could have been given had one been wanted. Only inwardly could the priest speak.

“What can I say to him? Speak to him Yourself. It is Your own work. Do it. I dare not try even to speak of You; he may not believe in You, but You made him, not I. Don’t leave Your business to me to mishandle. You must pity more than I can. I never saw him till now. Yet I care. You have known him all along and must care more. Do your own work, Master . . .”

HE did it-all, He himself, without any help. The priest did nothing, could stammer only incoherent words, confused, blurred, inconsequent, unfit to move any wayward purpose. Yet it was done, and the lad said at the last:

“Shall we go back together? I never meant to go back there” -pointing to the town- “but to end it all down there. I was practising. If you like, I will go back with you, and I will not come here again. It is a promise. I will go to the front again to-morrow; we shall never meet after now, but I will remember. Shall you?”

Here’s a scan of the article in context: 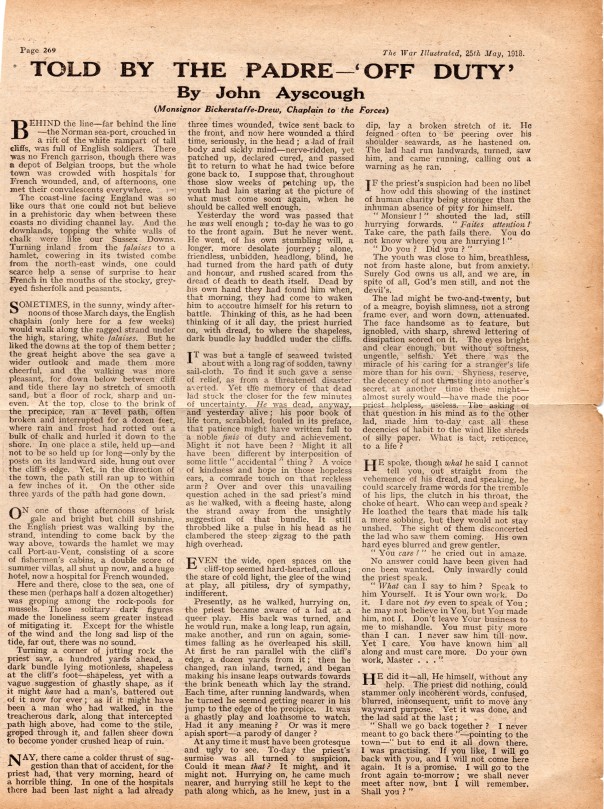