Chaplain Nicholas Davis of the 4th Texas Infantry, Hood’s Brigade was photographed wearing a very dark, presumably black, frock coat with a single row of gilt or brass buttons and a bit of non-regulation lace on the cuffs. Davis’ sartorial excess was no doubt attributable to the fact that he was a Presbyterian. This may be a studio portrait, but “altar” set-up could be similar to what a Protestant chaplain may use in the field with a Bible and two candles (photo from http://civilwartalk.com/threads/civil-war-chaplain-outfit.81491/)

The following chaplain kit was originally produced for either Catholic or liturgical Protestant, having a “reversible” cross with the corpus on one side and “IHS” symbol on the other. However, the owner of this kit removed the “IHS” symbol and put it above the corpus. This kit also includes the chalice with intinction insert, a ciborium, a lavabo bowl, paten, two candlesticks, two bottles (for wine and water) and a small container with individual cups, with most of the metal items being marked with “US.” (author’s collection). 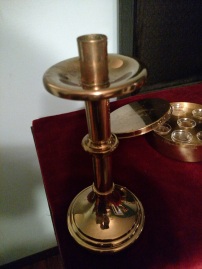 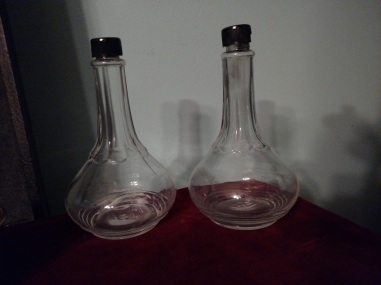 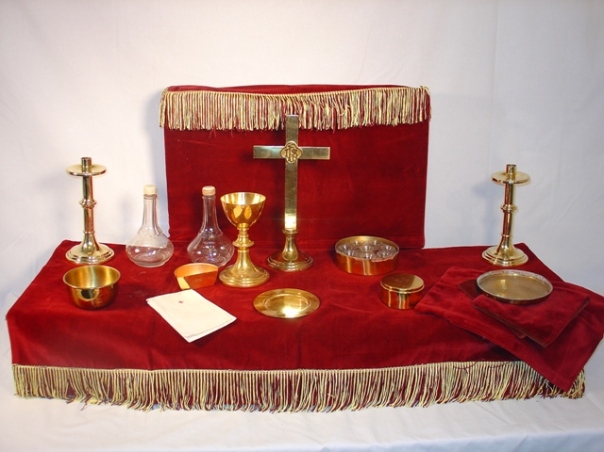 Here is how the above kit looks, complete. This one has the cross facing the Protestant direction, with the “IHS” symbol centered (photo courtesy of Chaplain Bob Nay).

These kits were generally provided to the chaplains by their endorsing agencies. In this kit (below) you see a very plain Latin cross with a tray with small individual cups for communion. This kit also come with a ciborium, two candlesticks and two glass jars for wine and water. For worship, the chaplain likely wouldn’t set the items on the case, but rather on an improvised altar using a Jeep hood, ammo or ration boxes (author’s collection). 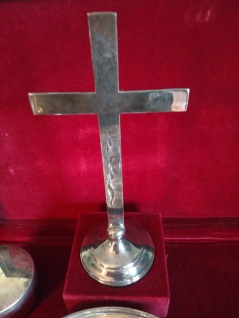 Following is another kit like the one above, this one id’d to Chaplain Norman E. Edwards. Chaplain Edwards evidently received the kit when he was a Lieutenant Colonel then covered the “LTC” when he was promoted to Colonel. This particular kit is missing one of the jars, the cross stand and the individual cups but the items are in remarkably good condition considering the box suffered water damage as seen by the first picture of the case and the last picture of the inside (author’s collection).

Here’s another example like the ones above, but with a lavabo bowl. Also notice the bottle opener for opening the wine(?) or grape juice. This particular kit was used by Chaplain Howard D. Small (photo courtesy of Chaplain Bob Nay): 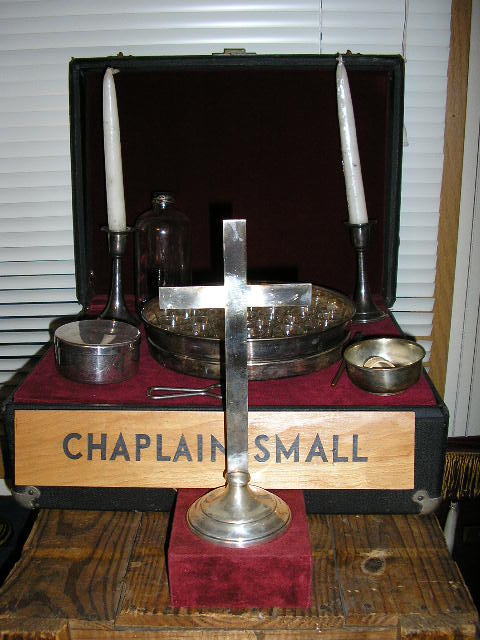 Below is a Protestant kit with a chalice (and no individual cups) for use by chaplains from more liturgical Protestant denominations. The long chrome tube held the hosts for communion. This particular kit is on display at the U.S. Army Chaplain Corps Museum (photo by author).

Below is another kit like the one above, though missing the candlesticks. It belonged to Jesse Swinson who was a Navy Reserve chaplain who served on the U.S.S. Doyen in the Pacific during WW2 (which won 6 battle stars), then with the Marines in the Korean War (kit on loan to The Chaplain Kit from Chaplain Tiann Morgner): 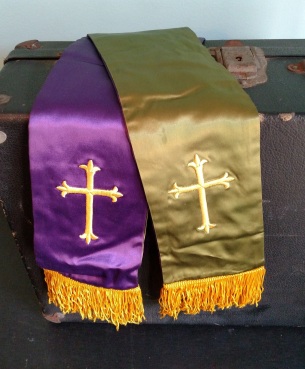 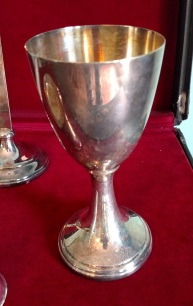 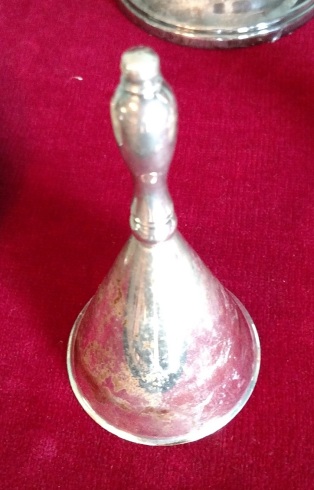 Some kits, like the one below, were even more specific to a particular denomination’s eucharistic theology. This one was used by Chaplain Eugene Murray who was a Church of Christ Chaplain (note the “CC” on the cover). It has both a chalice and an individual cup communion tray (photos courtesy of Chaplain Bob Nay):

Sometimes chaplains procured smaller kits for hospital or prison visitation. The below kit was used by Chaplain Henry Gerecke as he ministered to the Nazis at the Nuremberg trials, including Hermann Goering. It is on display at the U.S. Army Chaplain Corps Museum (author’s photo).

Below is another example of an individually-procured small kit, this one used by Chaplain George Wood (photo origin unknown): 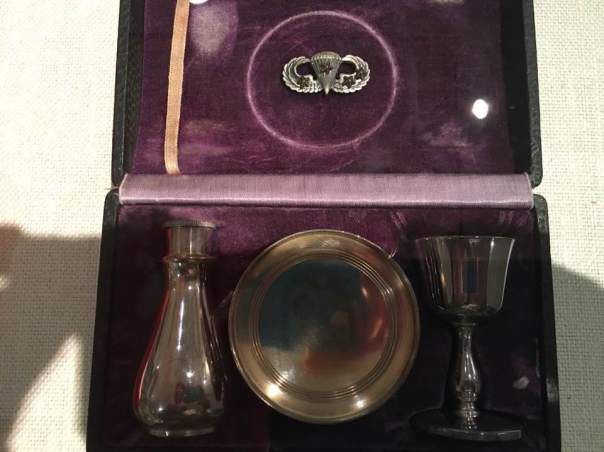 The below kit used by Chaplain George King is another example of a type of smaller kit used by chaplains in WW2 (photos courtesy of Thomas Asher):

There were larger kits that some chaplains were issued, officially called “Communion Set, Chapel, Individual-Cup; with case” but sometimes known as “Troop Transport” kits, like the ones below. They included individual cups and trays for use while being transported by sea from the United States to the theaters of war (and home) but also used to store the trays in chapels. Here is an example of two of these kits which were authorized in maroon, violet or dark green (photo and much information about these courtesy of Chaplain Bob Nay):

The following kit is 1950’s era, identifiable by the plastic bakelite handle instead of the leather-wrapped handle which were on those issued during WW2 (author’s collection): 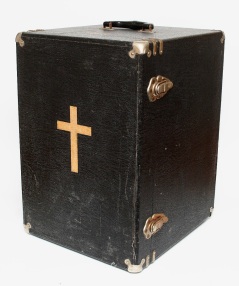 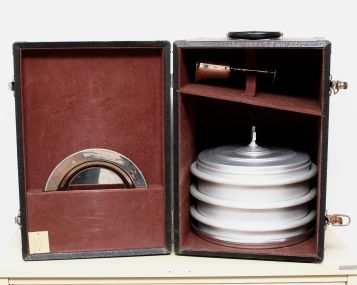 The inside, though in this kit, the individual cup communion trays and chalice are not original (author’s collection).

Going into the Vietnam era, Veteran chaplains would have used the kits they had from WW2 and/or the Korean War. 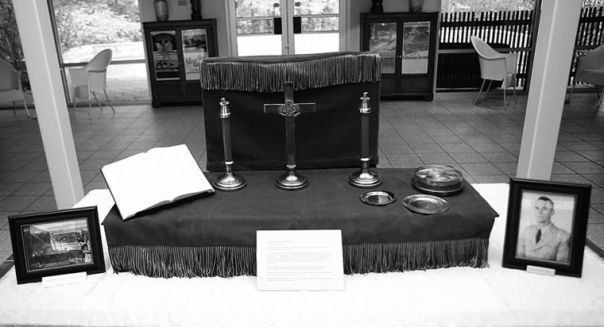 “This field altar was used by Chaplain (Col.) Thomas L. McMinn Jr. during the Vietnam War is on display in the lobby of the Berman Museum of World History [Anniston, Alabama]. McMinn’s fingerprints can still be seen on the cross.” (from The Daily Home website).

The “Type 1” chaplain kit began production early in the Vietnam War. It has the same pieces and parts the “Type 2” does with only minor differences. The most noticeable differences is the bag, which is a thinner, more shiny material than the Type 2 and doesn’t have a securing strap along the length of it (only two short ones over the top). The carry strap is also thinner than the Type 2, with an added shoulder cushion piece on it. There’s also a slight difference in the finish of the chrome pieces and the plastic bottles for the wine/juice and/or water are different. Finally, the plastic container inside the ciborium is larger in the Type 1 kit. The foam insert in the Type 1 kit was such that it deteriorated very badly over time. I don’t think I’ve seen the foam from a Type 1 that has survived. The foam in the Type 2 is tougher and more durable. Here’s an example of a Type 1 kit, though the vestments that came with them are missing (author’s collection): 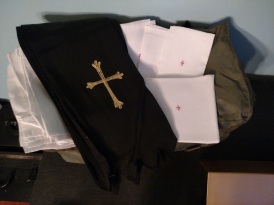 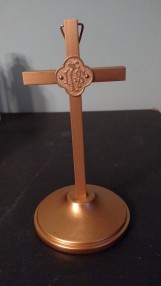 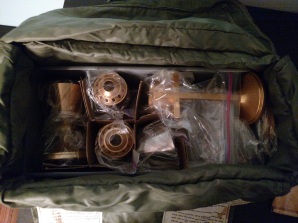 Below is an example of a Type 2 Protestant kit. Not much difference from the Type 1 (above) except as noted (author’s collection): 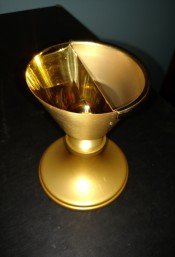 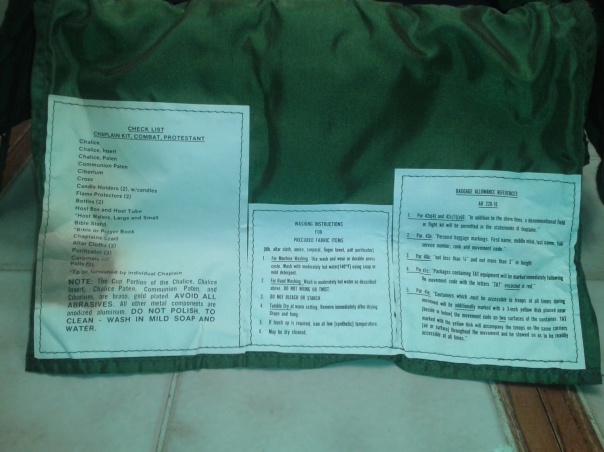 Here is a side-by-side comparison of the Type 1 and Type 2 bags (Type 1 is on the left). The texture of the material is very noticeable; the wine/juice bottles are different sizes as are the plastic inserts in the ciborium. Also, notice the difference in the shoulder straps (photo courtesy Chaplain Bob Nay):

The current kit is the lightest and most portable to date. It comes in two nylon cases, though I combined mine into one case for ease of transport (a 200-round SAW pouch, for those interested). It comes with everything necessary to perform a worship service with the celebration of Communion.

Below is the current issue chaplain kit in the Woodland Camouflage pattern. Notice the cross is Protestant and Catholic (author’s collection):