Keith Munro was born in Berkely CA. June 25th 1913 and graduated from the University of Ca. in 1938. “…at Mount Hermon [Conference Center in California] … he made his decision to go into the ministry. he was called into the armed forces in World War II…” 1

Munro graduated from Princeton Theological Seminary in 1941 and was ordained in August 1941, becoming a pastor of the First Presbyterian Church in Gilroy, California. He first received his Army Commission into the Infantry 2 months after the Pearl Harbor Attacks and shortly thereafter transferred to the U.S. Army Chaplains School, after which he was assigned to the 871st Airborne Engineer Aviation BN and deployed overseas to the Pacific Theater of Operations.

While a fighter airdome was under construction in New Guinea a flight of 12 Japanese medium bombers, escorted by 20 to 25 fighters, slipped in to bomb the field.  They were intercepted by p-39 Airacobras, who shot down all 12 bombers and three fighters. We lost four fighter planes.” “The Raid occurred on a Sunday morning just after Chaplain Keith B. Munro of California had finished conducting services.  Chaplain Munro was helping get the men safely into foxholes when one of the Japanese bombers crashed and exploded on the field.  The Chaplain was killed and several of the men were injured.  (News release by BG Stuart C. Godfrey appearing in a local paper).

Sadly, Chaplain Munro had just received news a few day earlier of his first child being born and he was killed just days before his 2nd wedding anniversary. A newspaper article soon after Munro’s death related his posthumous award of the Purple heart to his wife:

The Order of the Purple Heart has been conferred posthumously by direction of the President on Capt. Keith Munro, corps of chaplains, who was killed by Japanese bombs in New Guinea two months ago. A graduate of the Berkeley public school and Princeton University and a former Gazette carrier, Capt. Keith Munro was the son of Mr. and Mrs. Neil E. Munro, 2701 Hillegrass Ave.

‘You will shortly receive the Purple Heart medal, which has been posthumously awarded by direction of the President to your husband, Capt. Keith B. Munro, Corps of chaplains. It is sent as tangible expression of the country’s gratitude for his gallantry and devotion.

‘It is sent to you, as well, with my deepest personal sympathy  for your bereavement. The loss of a loved one is beyond man’s repairing, and the medal is of slight value; no so, however, the message it carries.

‘We are all comrades in arms in this battle for our country, and those who have gone are not, and never will be, forgotten by those of us who remain. I hope you will accept the medal in evidence of such remembrance (Local newspaper).

According to another newspaper article, Chaplain Munro’s “commanding officer wrote his parents in Berkeley, California: ‘He died with God’s words on his lips and could he have chosen the time of God’s calling, he would have had it thus. He was buried last evening in a grove of coconut palms surrounded by full blooming poinsettas. He gave his life that those he loved could live in peace and freedom’ ” (local newspaper).

Chaplain Munro is buried in the Manila American Cemetery in the Philippines. 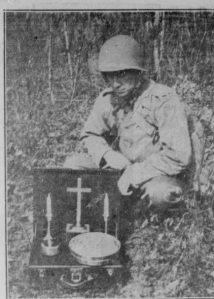 A newspaper photo of Chaplain Munro with his chaplain kit (photo courtesy of Chaplain bob Nay).

Other unattributed text from a U.S. Militaria Forum post.