Army Chaplain, His Daughter, A Letter

QUI NHON, RVN–U.S. Army Chaplain (Lieutenant Colonel) Robert C. Young (wife, Betty L., …, Stockton, Calif.) reads a letter from his 16-year old daughter Lynn that includes an article by her titled “The American Woman’s Role in the Vietnam War.” Chaplain Young feels, “This article awakens me to how deeply some American teenagers are thinking about their world and its troubles.” Lynn, pictured in the above inset, is a junior attending Stagg High School, Stockton, Calif. U.S. ARMY PHOTO BY SGT TOM LUSHER (author’s collection).

“I was very surprised that any teenage American student, even my daughter, would be so moved by present world troubles to think at length about them,” reflects the 38 year-old chaplain.

“I am very proud to know some of America’s youth are thinking about their relationship to the world, and wish to put their thoughts into meaningful action,” continues the World War II veteran.

To express her thoughts and bare her emotions, Lynn wrote the following article:

“Picture a young woman, soft golden hair falling on her shoulders, sitting in an easy chair while writing a letter. Suddenly, as if from nowhere, tears cloud her eyes and for a few moments she finds herself in an emotional upheaval.

Or look at the mother of four youngsters helplessly trying to send her children to church on Sunday morning, although she herself has lost all faith in God.

Watch the girl next to you in class stare at the floor, her thoughts miles away, suddenly tense up as she tries to hold her composure and keep her inner thoughts from showing.

These women are the unknown. They have lost their faith in our society. They are lonely and afraid. Yes, these women all have something in common. Someone very dear and close to them, a boyfriend, a husband, or a father is in Vietnam. They anxiously await the daily letter of good news and they fear the very letter of death.

But, is this the only way of life for them? Is there no way the American woman can share the burden of the war. Let’s see how their personal needs can be satisfied.

For many, who are still in school or who have no special talents, the closest link to their loved one is a daily letter of love or perhaps an occasional tape recording of a special home event such as a birthday. Pictures, too, can add many a blessing to a tired, worn out soldier. And oh, what joy to receive a special homemade cake or favorite food in the mail. And the pleasure of packing such a box is immeasurable to the left behind woman. By these tokens of love the man feels a sense of deep understanding and the woman’s desire to be needed and appreciated is fulfilled.

Others, however, feel they do have a special talent and are eager and willing to face personal hardships. They are ready to support their country and want to aid the badly wounded soldiers; the ones with a lost arm or leg or a serious chest wound. These American women are finding and filling a useful role in Vietnam.

What about the actress or comedian? Can she find a way of bringing entertainment or laughter, a sign of hope to a company in rain-drenched tents whose substitute for home cooking was a can of C-rations? Of course! Phyllis Diller gave up her own Christmas to make a tour with Bob Hope. Together they were able to ring a sign of laughter, a sign of hope to a company of American soldiers. For a few cherished moments the bitter war was forgotten and peace and love were remembered. Once again an American woman shared the Vietnam crisis with the American man.

For the more daring woman the job of a newspaper or magazine reporter lies open. To have an informed homeland is equally important to having an organized battle front; informed people will do their share in supporting the war effort. The soldier in Vietnam is thus recognized and gains a deeper sense of loyalty with many to back him. But, by all means, the American woman does not have to serve in Vietnam to show her loyalty and to satisfy her personal desire to ‘suffer’ with her loved one. Right here in Stockton (California) in Sharpe Army Depot which deals with much of the war supplies going to Vietnam. Just ask an employee there how it feels to work with incoming and outgoing supplies. Ask a woman what it’s like to work in data processing when she knows her work is a very vital part of the supply movement to Vietnam; she will tell you there is deep satisfaction.

And finally, the individual work in a church group is another way the American woman can satisfy her needs and desires to help out with the war. Many clothes and books are collected and sent to a loved one or an Army chaplain, so that he can distribute the items as thought best to the poor and needy of the war or the overworked soldier. This is a way of sharing the war’s heavy burden.

So, as you see, there are numerous roles the American woman can play in the Vietnam War. Whether it is by sending letters, through nursing or entertaining, or by informing the nation of war happenings, by working in defense industries or through a church group, the needs of a woman can be satisfied and great assistance can be given to the war.

Picture once more a happy, useful woman sitting in her easy chair writing her daily letter. But this time tears of sorrow do not fall, but tears of happiness in their place. This woman is glad she is an American and she is glad to be able to say that she too feels the burden of the war and that she cares.”

Lynn’s father, smiling broadly, hints of his youngest girl’s ambition for the future, “She’s planning a teaching career . . . unless some good looking man gets in the picture and proposes marriage.” 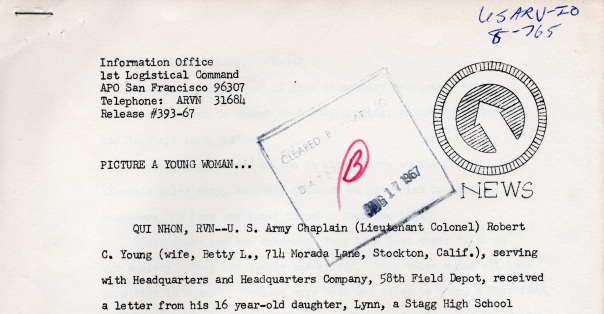 Part of the press release from the above article (author’s collection).