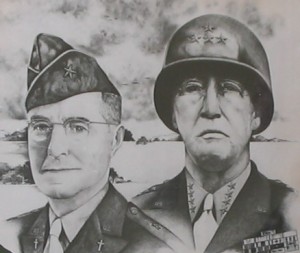 Chaplain James H. O’Neill was the Chief Chaplain for the Third Army through five campaigns of World War Two with General George Patton commanding. The strong faith, as well as entrenched (and sometimes strange) religious views, of General Patton are well known. These were evidenced in a discussion between Patton and O’Neill about the importance of prayer for the Soldier, after which General Patton requested that Chaplain O’Neill get that message out to his command. As a result, Chaplain O’Neill wrote Training Letter No. 5, dated 14 December 1944, for distribution to the Third Army Chaplains. After reading it, however, General Patton ordered it sent to all of the Third Army commanders, down to Regimental level. Here is the text of Training Letter No. 5:

Chaplains of the Third Army,

At this stage of the operations I would call upon the chaplains and the men of the Third United States Army to focus their attention on the importance of prayer.

Our glorious march from the Normandy Beach across France to where we stand, before and beyond the Siegfried Line, with the wreckage of the German Army behind us should convince the most skeptical soldier that God has ridden with our banner. Pestilence and famine have not touched us. We have continued in unity of purpose. We have had no quitters; and our leadership has been masterful. The Third Army has no roster of Retreats. None of Defeats. We have no memory of a lost battle to hand on to our children from this great campaign.

But we are not stopping at the Siegfried Line. Tough days may be ahead of us before we eat our rations in the Chancellery of the Deutsches Reich.

As chaplains it is our business to pray. We preach its importance. We urge its practice. But the time is now to intensify our faith in prayer, not alone with ourselves, but with every believing man, Protestant, Catholic, Jew, or Christian in the ranks of the Third United States Army.

Those who pray do more for the world than those who fight; and if the world goes from bad to worse, it is because there are more battles than prayers. ‘Hands lifted up,’ said Bosuet, ‘smash more battalions than hands that strike.’ Gideon of Bible fame was least in his father’s house. He came from Israel’s smallest tribe. But he was a mighty man of valor. His strength lay not in his military might, but in his recognition of God’s proper claims upon his life. He reduced his Army from thirty-two thousand to three hundred men lest the people of Israel would think that their valor had saved them. We have no intention to reduce our vast striking force. But we must urge, instruct, and indoctrinate every fighting man to pray as well as fight. In Gideon’s day, and in our own, spiritually alert minorities carry the burdens and bring the victories.

Urge all of your men to pray, not alone in church, but everywhere. Pray when driving. Pray when fighting. Pray alone. Pray with others. Pray by night and pray by day. Pray for the cessation of immoderate rains, for good weather for Battle. Pray for the defeat of our wicked enemy whose banner is injustice and whose good is oppression. Pray for victory. Pray for our Army, and Pray for Peace.

We must march together, all out for God. The soldier who ‘cracks up’ does not need sympathy or comfort as much as he needs strength. We are not trying to make the best of these days. It is our job to make the most of them. Now is not the time to follow God from ‘afar off.’ This Army needs the assurance and the faith that God is with us. With prayer, we cannot fail.

Be assured that this message on prayer has the approval, the encouragement, and the enthusiastic support of the Third United States Army Commander.

With every good wish to each of you for a very Happy Christmas, and my personal congratulations for your splendid and courageous work since landing on the beach, I am,

Adapted from “The True Story of the Patton Prayer” by Msgr. James H. O’Neill (from the Review of the News, 6 October 1971), http://www.pattonhq.com/prayer.html, accessed 9 Sep 17.