This Christmas season (2015) I came across an interesting article entitled, “Washington’s Christmas Poem…” As it turned out it was less about the Christmas poem that for years people thought Washington, at about the age of 13, wrote and more about the influence that Christianity had on the General of the Continental Army and first Commander and Chief of U.S. forces as well as his subsequent Christian influence on the military and nation.

Many modern scholars deny, or at least down-play, the impact that Judeo-Christian values have had on the United States but if we’re going to be honest with history, we need to acknowledge and accept that influence. Perhaps the fear that modern scholars (at least those who are pressured by politics) have is that an acknowledgement of the influence of a particular religion in our nation’s history would suggest insensitivity or intolerance to other religions thus denying a foundational principal of our Constitution which both prohibits the establishment of a particular religion by government and protects the free exercise of religion by its people. But I contend that recognizing the role of a particular religion in our history is only that, an acknowledgement of our history, and not an establishment of religion or a denial of its free exercise.

With that in mind, I offer the aforementioned article without edit (except for formatting) or additional commentary and with all links intact, for your education and edification. It was written by Ali Meyer and first appeared on cnsnews.com on 24 December 2014, more recently on the same website on 23 December 2015.

Washington’s Christmas Poem: ‘Assist Me to Sing the Morn, On Which the Savior of Mankind Was Born’

(CNSNews.com) – George Washington, the first president of the United States and a Founding Father of our nation, was a devout Christian baptized shortly after his birth by his parents, who were members of the Church of England.

The book, “George Washington the Christian,” by William J. Johnson  highlights Washington’s religious foundation, his prayers, his religious habits, and his actions taken as a Christian soldier.

One of the stories that Johnson recounts of a 13-year-old Washington includes some verses that he copied on Christmas Day.

“Assist me, Muse divine, to sing the Morn, on Which the Saviour of Mankind was born,” Washington said.

“Some think that he composed poems himself, but it is more likely that he copied them from an unknown source,” Johnson explains. “It shows the manner of Christian training he had received at home. He had absorbed ‘the spirit of the Day and the facts of the faith, as well as the rule and model of Christian life.’”

“George Washington descended from a long line of excellent churchmen,” states Johnson. “If Washington’s military character was developed out of materials which came to him by inheritance from both sides of his family, so too was his religious character. That love of the church which we have seen as a distinguishing mark in his family became a strong inheritance which his own will and intelligence did not set aside.”

Washington took those values and beliefs with him in the army and encouraged others to do the same.

According to Johnson, when Washington was told that the British troops at Lexington had fired on and killed several Americans, Washington replied, “I grieve for the death of my countrymen; but rejoice that the British are still determined to keep God on our side.”

The day after Washington took command of the army on July 4, 1775, he issued an order saying,

“The General most earnestly requires and expects due observance of those articles of war established for the government of the army, which forbid profane cursing, swearing, and drunkenness. And in like manner he requires and expects of all officers and soldiers, not engaged in actual duty, a punctual attendance on Divine service, to implore the blessing of Heaven upon the means used for our safety and defense.” 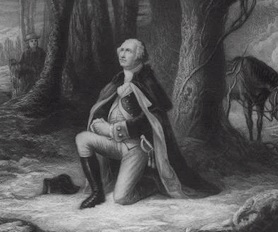 General George Washington praying at Valley Forge (from an 1866 engraving).

About a year later on July 9, 1776, Washington issued another order defining a “Christian soldier.”

It stated, “The honorable Continental Congress having been pleased to allow a chaplain to each regiment, with the pay of thirty-three dollars and one-third per month, the colonels or commanding officers of each regiment are directed to procure chaplains accordingly, persons of good characters and exemplary lives, and to see that all inferior officers and soldiers pay them a suitable respect.”

“The blessing and protection of Heaven are at all times necessary, but especially so in times of public distress and danger,” reads the order.  “The General hopes and trusts, that every officer and man will endeavor so to live and act as becomes a Christian soldier, defending the dearest rights and liberties of his country.”

(This article was initially published on Dec. 24, 2014, by then-CNSNews.com reporter Ali Meyer.)

The original article can be found on the CNS News website.