This article was written by Thomas J. Fleming and appeared in The National Newspaper Magazine, 26 March 1967.

Faces at Dau Tieng, Vietnam headquarters of the First Division, were grim on November 8, 1966. The Big Red One’s 1st Battalion was under fierce attack by Vietcong in War Zone C, northwest of Saigon, and casualties had been heavy. Helicopters were standing by to airlift medics and troop reinforcements. Into one of the choppers stepped boyish Chaplain Michael Joseph Quealy, who had grown up on Manhattan’s streets dreaming of becoming a foreign missionary. 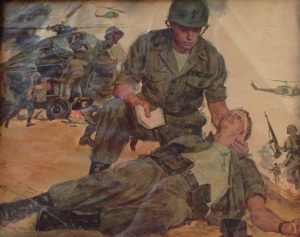 Illustration by William S. Smith which appeared with the article by Thomas J. Fleming.

He was not assigned to the 1st Battalion but he insisted on going out with the first airlift to do what he could for the wounded and dying. Several senior officers told him it was too dangerous, but Chaplain Quealy waved them aside and a half hour later was on the battlefield, giving the last rites of his church to dying soldiers … As he bent over to console a wounded man, a VC leaped from the underbrush and cut loose with a machine gun. The 37-year-old chaplain died instantly. Beside his body, grief-stricken GIs found a diary. The last entry was a passage from the Gospel according to Matthew: “So will my heavenly Father treat you unless each of you forgives his brother with all his heart.”

Michael Quealy was the fifth American chaplain to die in Vietnam. He becomes, in death, part of the proud tradition of the least-known branch of the American armed forces–the Chaplain Corps. Recently one of the six presidents of the World Council of Churches, Archbishop Iakovos, head of the Greek Orthodox Church of North and South America, told a group of Catholics that theologians searching for Christian unity ought to study Army chaplains.

The Archbishop’s words underscore one of the many, little understood contributions of these “soldiers of the cross.” Most Americans tend to take chaplains for granted. They are “sky pilots,” part of the Army and Navy’s routine staff. They hold religious services, listen to complaints (“Tell it to the chaplain” was what everybody told a griper during World War II).

But the chaplain’s job is far from routine, and over the years it has become more and more profound. From a kind of spiritual cheerleader, the American chaplain has evolved into a witness for the values of the spirit, in a world at war.