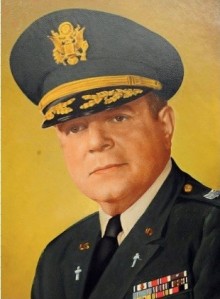 Born in Brooklyn, New York in 1914, Anthony Sidoti was ordained a Catholic priest in 1940. When he became an Army chaplain in 1942, he was one of the youngest at just 28 years old. Sidoti’s young age didn’t stop him from distinguishing himself, however.

Upon arriving in Europe just a few days after D-Day, he was first assigned to a medical unit then a few months later to 3/358 Infantry Regiment, 90th Infantry Division.

During Sidoti’s service in World War II he received two Silver Stars. “His first Silver Star citation stated Sidoti established an aid station in an abandoned cement factory near the Moselle River in France during an assault in November 1944 … ‘working for 36 consecutive hours, he directed and personally assisted in the evacuation of casualties from the front lines to the far side of the river,’ stated the citation, noting Sidoti, under constant enemy fire, was tireless, courageous and encouraging to the troops.” (Cudmore, 2012)

“Sidoti’s other Silver Star was earned in combat in March 1945 in Ehr, Germany, during an intense mortar, machine gun and small arms attack. The citation stated, ‘Learning of a seriously wounded man lying in an exposed position, Chaplain Sidoti unhesitatingly advanced through the fire, reached the casualty and carried him to a litter squad. He then carried the dead body of another casualty to a place of cover. The men of the company, inspired by his courageous and selfless actions, reorganized themselves and completed the battalion mission successfully and without further casualties.'” (Cudmore, 2012)

“TS” card distributed by Chaplain Sidoti to encourage Soldiers to pay him a visit.

“In 1948, Fr. Sidoti became the division chaplain for the 27th Infantry Division of the New York Army National Guard. In 1957, he was promoted to full colonel in the N.Y. Army National Guard and served in the capacity of the staff chaplain for the entire State of New York Army National Guard. In that position, he was the adviser to the commanding general of the guard on all matters pertaining to religion, welfare, morals and morale for the approximately 26,000 guardsmen. He also supervised the work, training and activities of all guard chaplains.” (We The Italians, 2018)

Following his time in World War II, Sidoti ministered in several positions in the Catholic Church in and around the Albany, New York area. Chaplain Sidoti died in May 2004 but was posthumously awarded the Four Chaplains Humanitarian Award, presented by U.S. Representative Paul Tonko in February 2013 (Fox23News, 2013).