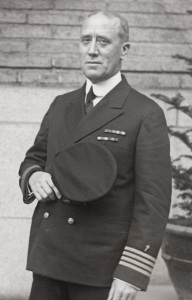 Captain John Brown Frazier, a Southern Methodist minister, was appointed as head of the Chaplain Corps on November 5, 1917. As early as 1871, chaplains had advocated for one of their number to represent their interests in Washington. With the coming of World War I, the appointment became a necessity due to the significant increase in the number of chaplains and the urgency preparation.

Chaplain William W. Edel, who retired chaplain in 1946 after nearly 30 years wrote of Frazier, saying “He was a big, hardmuscled man, with a face that looked have been chiseled out of stone, and he resolute as he looked. But under that there was compassion and tenderness most amazing and unpredictable sense That sense of humor could ridicule and was the cut of the surgeon’s knife, corrective healing. And such a man, in 1917, was waiting when the call came to take the steer the Corps through its most challenging “When he reported for duty at the Navy Department, he found he must develop his own continually breaking new ground, solving problems, laying new plans, continually fresh opportunities and fresh discouragement, finding new friends. Through it all he thrust way, carrying the Corps of Chaplains to heights of efficiency and prestige. No resolute could have done it.”

The Office of Chief of Naval Chaplains officially created by law until December when the rank of Rear Admiral was attached to the position. Within the Chaplain Corps, the title “Chief of Chaplains” was universally used before this date.

When the United States declared war on Germany on April 6, 1917, there were only 40 chaplains on active duty in the Navy. By the time of the signing of the Armistice on Novemnber 11, 1918, 200 chaplains were serving. Three decades later, during World War II, over 2,800 men wore the uniform of the Navy chaplain.

Rear Admiral Robert D. Workman, Chief of Chaplains during World War II (and the first to be made Rear Admiral while still on active duty), paid tribute to Chaplain Frazier during burial services for him on November 11, 1939, at Arlington Cemetery.

Workman said, “Upon the shoulders of our first Chief rested the responsibility of selecting an exceptionally large number of new chaplains, and of establishing our Corps and its responsibilities on a basis such as had never been undertaken prior to that time. The manner in which Chaplain Frazier faced his task and the degree of success which he attained have left us an example and a heritage for which we must ever be thankful.”

Text from an Arlington National Cemetery website (not official).