During World War 2, a few photographers produced pictures of women, sometimes scantily clad, for  publication. Sometimes these photographs would appear in “Yank” and other military publications that went to Service Members deployed far from home. “Varga Girls” became famous among men at war, and could often be seen hanging in Soldiers’ work or living areas. Below is an article picked up by Stars and Stripes in 1944, where a chaplain condemned them as being “inspired by the devil”: 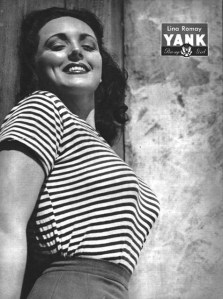 “NASHVILLE, Tenn., Aug. 18 [1944] (ANS)- The works of Artists Varga and Petty in Esquire magazine are likened to Japanese surrender tickets and are labeled ‘inspired by the devil’ in an editorial written by a chaplain and appearing in the current edition of the Nashville Army Air Center’s newspaper.

” ‘The devil knows that war causes men to remain for long periods without companionship of their wives and sweethearts so he encourages Varga or Petty surrender tickets in such magazines to corrupt their morals,’ the editorial said.”

I wonder how that chaplain would react to what’s available to Service Members today!

The article from Stars and Strips, European Theater of Operations, 19 August 1944 (author’s collection).