The  saying  goes,  “There  are  no  atheists  in  foxholes.” While the veracity of that saying is
up for debate, one thing is true: if a Soldier is in a foxhole, there is an Army chaplain and
religious affairs specialist close by. 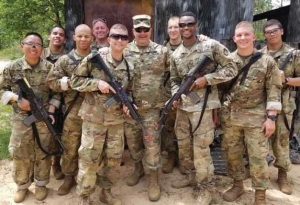 The  event  will  be  held  at  the  University  of  South  Carolina Alumni  Center,  900  Senate
Street,  Columbia,  South  Carolina. All  are  welcome.  For  ticket  information  visit
https://www.eventbrite.com/o/united-states-army-chaplain-center-and-school-17341728260. This will be an evening of fun and inspiration as we celebrate the 100th Anniversary of the Army Chaplain School by “Looking back … launching forward,” said Chap. (Col.) Jeffery D. Hawkins, commandant of the U.S. Army Chaplaincy Center and School.

For 243 Years just as the Army itself, chaplains have served to “bring God to Soldiers and Soldiers to God.”

It was Continental Army Commander, Gen. George Washing- ton who is credited with saying, “We need chaplains.” And on his request to the Continental Congress, chaplains were established as part of the Army on July 25, 1775.

Army chaplains have stood alongside America’s fighting men and  women  during  all  of  our  wars.  Some  are  buried  in Arlington National Cemetery and cemeteries across the country. On the campus  of  the  U.S. Army  Chaplain  Center  and  School  at  Fort Jackson is a memorial garden with the names of chaplains and religious affairs specialist wars, conflicts and attacks on our homeland.

The Army Chief of Chaplains, Chap. (Maj. Gen.) Paul Hurley has charged Army chaplains to “Live the Call Fiercely” as they go out among units to carry out their duties to nurture the living, care for the wounded and honor the fallen.

The importance of chaplains in the Army was fully realized with the establishment of the Army
Chaplain School. 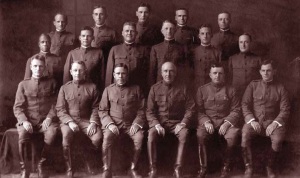 A photo of one of the first class of graduates from the Army Chaplain School, then located at Camp Grant, Illinois, 1920 (USACHCS photo).

“Here at USACHCS we are ‘Shaping servant leaders … of unmatched character, competence and
connection … for God and country,’” Hawkins said.

The USACHCS trains chaplains and religious affairs specialists/NCOs to provide religious support to America’s Army and their families while assisting commanders in ensuring the right of free exercise of religion for all Soldiers.
Over 20 courses are offered to the chaplains and the religious affairs specialists/NCOs to
include the Chaplain Officer Basic  Leader  Course,  residence  and  non-residence  Chaplain
Captain Career Course, Brigade Chaplain Course, Advanced Individual Training and the Lieutenant Colonel Course. Functional Courses include the Resource Manager Course and the Fund Clerk Course.

The religious affairs specialist also helps ensure a Soldier’s spiritual wellness is taken care of.
Religious  affairs  specialist  training  began  as  the  Enlisted Assistant  Basic  Course  in
1950  at  the  Chaplain  School  then located at Carlisle Barracks, Pennsylvania. In 1996, the U.S.
Army Chaplain Center and School, including both officer and enlisted courses, moved to its present home at Fort Jackson, South Carolina.

Today, there are chaplains and religious affairs specialists serving the Army in active duty, Reserve and National Guard units around the world.

CHBOLC is an intensive, outcomes-based, entry-level, initial military training process for newly accessioned chaplains and chaplain candidates, with a mission to train students to become religious leaders who demonstrate the core competencies of nurture the living, care for the wounded and honor the fallen, while advising commanders and providing religious support to the Army Family.