22 July 1864: Chaplain Haney takes up arms and earns the MoH 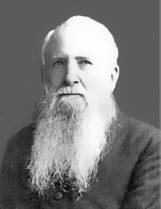 “Chaplain Milton L. Haney was awarded the Medal of Honor on November 3, 1896. It was awarded for his actions during the Battle of Atlanta at Peachtree Creek on July 22, 1864. Four men earned the medal of Honor that day, and among those four was Milton Haney, sometimes called “The Fighting Chaplain” by the men of the 55th Illinois Infantry.”1

“When the tide of the battle was critical on July 22, Chaplain Haney voluntarily took up a musket and joined the ranks of his regiment, fighting with his men in retaking the Union works that had previously fallen to enemy forces.”2 “Milton Haney was awarded the Medal of Honor for conspicuous gallantry in a federal counterattack during fierce fighting outside Atlanta.”3