Remembering the Five Chaplains of the Mallory

Just four days after The Four Chaplains were lost with the sinking of the Dorchester, five more chaplains died when a German sub sunk the Mallory, on this day in Chaplain Corps History, 7 February 1943.

If you’d like more information on the Mallory’s last voyage, the five chaplains who perished as well as the two chaplains who survived, and other details not included in the shorter version above, this 15-minute video is for you! 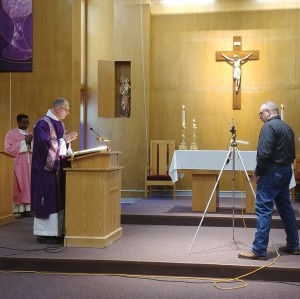 In our current COVID-19 situation, many chaplains have developed further in the use of alternative media to continue to provide religious support to the service members, civilians and family members to whom they minister. We have seen increased skill and creativity as chaplains and their enlisted assistants have learned and grown in their expertise. The use of alternative media isn’t new to the respective Chaplain Corps, however. In the early 1950’s, for example, the U.S. Army Chaplain School at Fort Slocum, NY, video recorded sermons for student development, cadre used closed-circuit television to increase their training reach and chaplain’s assistants were taught the use of audio-visual equipment. Chaplains are miles ahead of where they were 50 years ago, but still owe to their predecessors thanks for the foundation on which they now build to continue to serve and minister to those who depend on them.

Below are examples of how the Army Chaplain School used the technology of their day for training and preparing chaplains and their assistants in 1952.

This “picture shows a group of chaplain students in the course in Speech Techniques watching as an instructor briefs them for a laboratory exercise. Presently, each of them will give an assigned ‘speech’ before the camera. By this means, the student will have an opportunity to watch himself on a television receiver which is at the rear of his audience. Thus, while his voice is being recorded, he will be able to see himself ‘as others see him.'”1

“As with the chaplains, the occasion sometimes arises when it becomes desirable to receive instruction by way of closed circuit television system which originates in the studio to present the same lesson to several classrooms at once. The Chaplain School, a pioneer in this kind of teaching by closed circuit television, has worked with other educational agencies, military and civilian to develop effective techniques for this new adaptation of the television medium.”2

“The chaplain’s enlisted assistant is his ‘right hand man’ in garrison and in combat.” At the U.S. Army Chaplain School they take “…special courses in audiovisuals and motion picture projection [to] make it possible for them to increase their value as assistants to army chaplains.”3