With 7 December upon us, it is good to remember the ministry and valiantry of Navy Chaplains during the Japanese attack on U.S. forces at Pearl Harbor. The following article is from Drury’s Navy history. 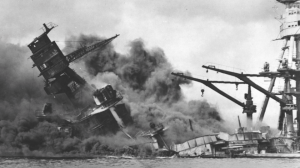 “In a well-coordinated attack, which revealed detailed information about the disposition of the ships in the harbor, the Japanese planes dropped their torpedoes and bombs with devasting effect. According to reports, one Japanese pilot realized a dive bomber’s dream by dropping a bomb down one of Arizona’s stacks.2 A tremendous explosion followed. The forward magazine blew up. Oil from her tanks poured out upon the water and began to burn. In an instant the proud Arizona was a roaring inferno, entombing most of her crew. Only a few escaped the holocaust and Tom Kirkpatrick was not among them.”

Four enemy torpedoes plunged into the port side of the Oklahoma, in which Chaplain A. H. Schmitt was serving his first tour of duty at sea in the Navy. The vessel began to list to port as water poured into her hold. Gradually the ship rolled over, settling with the starboard side of the bottom above water. Many men were trapped. Chaplain Schmitt made his way with several of the crew to a compartment. An open port-hole afforded means of escape, and through this the men, one by one, with the Chaplain’s help, crawled to safety.

Continue reading this article at The Chaplain Kit…