← A Day in the Life of a Confederate Chaplain
“Look, Fellows, Here Comes the Chaplain!” →

“No Chaplain– can’t let them get you too!”

During World War 2, many advertisers paid for ad space which not only promoted their product but showed the public what was happening in the war zones. Here’s an example of a Hammond Organ ad which promoted the ministry of the chaplains.

“No Chaplain– can’t let them get you too!”

“Our own chaplain lay wounded beyond our lines. It was going to be a tough job getting him back through the hail of lead the enemy was pouring over. Some of us were talking the situation over with the chaplain from a nearby outfit. Suddenly the chaplain said, ‘I’ll get him,’ and started for the front line. Our commanding officer grabbed him just in time. ‘Sorry, Chaplain,’ we heard him say, ‘Can’t let them get you, too!'”

“This true story, based on an official communique, typifies the chaplain in action. Though he performs many such deeds, he is never expected to assume risks beyond the line of duty. His work is clearly defined; his sole duty is to minister to spiritual needs of our fighting forces.

“Of course, to be in constant attendance on his men, he must often serve under fire. When this is necessary, his cool devotion to duty is an inspiration to all. However, service with distinction is not confined to those who serve in action. Chaplains assigned to camps and bases at home show the same qualities that characterize their colleagues overseas.

“Yes, the individual deeds of the chaplain reflect the spirit of the entire Chaplain Service. Wherever the chaplain serves, he is making a priceless contribution to fighting morale-building finer citizens for the world of tomorrow.” 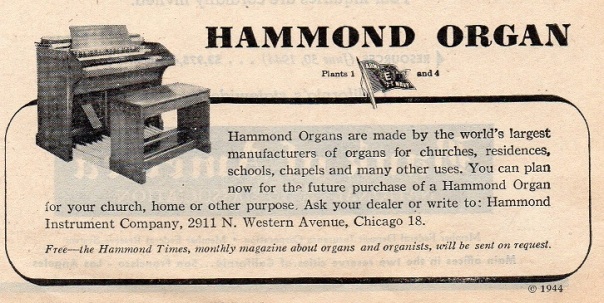 Text and photos from a 1944 magazine advertisement by Hammond Organ (TCK Archives).

Posted on 10 May 2019, in Chaplaincy, History and tagged Hammond Organ, PSA, Public Service Announcement. Bookmark the permalink. Leave a comment.

← A Day in the Life of a Confederate Chaplain
“Look, Fellows, Here Comes the Chaplain!” →