Dedication of the Tomb of the Unknown Soldier, 11 November 1921

As Veteran’s Day 2017 comes to a close, here’s a brief look back 96 years to Armistice Day, 11 November 1921, when Chaplain John T. Axton (then the Army Chief Chaplain) committed the body of an unknown WW1 Soldier, dedicating the Tomb of the Unknown Soldier at Arlington National Cemetery. 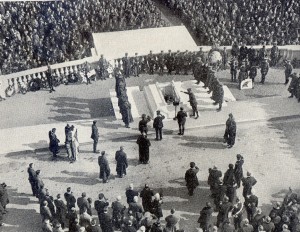 Three years after the end of World War 1, an unidentified Soldier who had been killed in fighting in France during the war was brought to Washington D.C. and lay in state in the Capitol Rotunda until 11 November 1921. On this Armistice day, the body of the unknown Soldier was committed and interred outside the Memorial Amphitheater at Arlington National Cemetery, along with the dedication of the Tomb of the Unknown Soldier.

Read the rest of this story (along with more pictures) here.