The Technical Manual The Chaplain (TM 16-205), issued by the War Department in 1941, makes clear the necessity of chaplains caring for their own spiritual well-being: 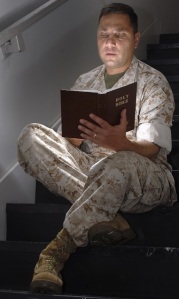 Private devotions. That which is true of the mental side is to a far greater degree true of the spiritual and devotional aspect of a chaplain’s life. It is absolutely necessary for the chaplain to keep in touch with spiritual things. Meditation, prayer, and devotion are more imperatively demanded for the soul of him1 who leads than for those who worship in the pews. Private devotions and religious retreats and study should be systematically observed in all sincerity and honesty and not as a mere routine.2

While today most would likely agree that meditation, prayer and devotion are just as demanded for the soul of those who worship in the pews, most would also still agree that the one who leads in worship needs to be well-prepared spiritually to do so.

1 The historical text has been retained, from a time when only men served as chaplains.