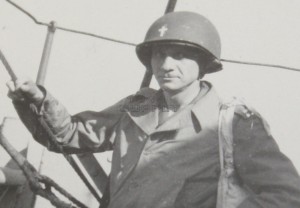 Washington, D.C. [ca. 1945] – Chaplain Robert P. Canis now assigned to a general hospital in Europe has described to the General Commission on Army and Navy Chaplains, Washington, D.C. how he has conducted services in strange and inconvenient places. He pays high tribute to the response given to spiritual matters by American men in uniform. Chaplain Canis said:

“Three weeks after arriving in England, I was assigned to a general hospital. Our chapel was a Nissen hut completely furnished with every aid to worship. In May we took leave of it and ever since have worshiped in a chapel in the fields. In our England staging area that chapel was a long tent with mother earth for pews and a rough board covered with the chaplain’s blanket for an altar.

“On our last Sunday in England this chapel became the scene of a most unusual departure Communion Service. All else was already on its way across the channel. A few hymn books, and a field organ borrowed from a neighboring hospital chaplain constituted the equipment of our tent filled with officers, nurses and enlisted men seeking that extra bit of spiritual strength needed on the shores of Normandy. But in spite of the absence of every traditional touch of a normal chapel service, the atmosphere seemed more alive with honest faith than ever before. Members of all denominations came to the altar to receive the Communion. Some knelt, some stood, and some cupped their hands to receive the bread. Others received it directly in their mouths. While still others served themselves.