“The school’s sixteenth move came in 1996, when the Chaplain Center and School came to its present home at Fort Jackson, South Carolina, having moved from Fort Monmouth, New Jersey. The school is also recognized as the home of the Chaplain Corps Regiment since it was formally activated on 29 July 1986. The Army Chaplain Museum is also located at the school.”1 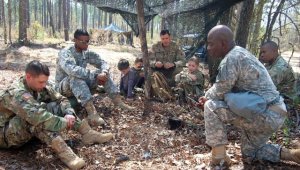 CHBOLC is an intensive, outcomes-based, entry-level, initial military training process for newly accessioned chaplains and chaplain candidates, with a mission to train students to become religious leaders who demonstrate the core competencies of nurture the living, care for the wounded and honor the fallen, while advising commanders and providing religious support to the Army Family.

“It was an interesting experience, personally, taking on a role of a staff officer, a role that I will probably never hold (in his normal duties), but also having this chaplain identity and being there for chaplain tasks,” said 1st Lt. Lemuel T. James, a member of the 28th Infantry Division, Pennsylvania Army National Guard.

He added, “It was interesting to be able to play the role of the XO (executive officer), to see what they are responsible for in TOC operations, while also thinking through my own personal tasks that I needed to do in the field. It gave me a feeling that things are going to happen and I’m going to have to perform, even in those difficult times.”

For many students, CHBOLC is their first opportunity to work as a member of a multi-faith team, providing religious support and services to a diverse community. However, for those who have previous military service, it provides a totally different challenge.

“For me, it was a good challenge to stretch myself and find out if what I’ve learned as a civilian pastor and here in the classroom, has prepared me well enough to actually perform or provide religious support in that kind (deployed) of environment” said Chap. (1st Lt.) Michael B. Johnson, assigned to the 420th Chemical Battalion, Washington Army National Guard.

Johnson, who spent 10 years on active duty as a musician and has deployed before, said, “one of the exciting parts, for me, was to lead a squad of nine chaplains out there, and to see them grow, to see things start to click for them. That was one of the things I enjoyed the most.”

Arrington said that “the end result of Capstone is a more confident and competent chaplain that is prepared to provide religious support to their first unit of assignment. Capstone is an essential element in delivering exceptional chaplains of unmatched character, competence, and connection.”

To support student success, CHBOLC stresses: teamwork to accomplish the religious support mission; integration into the Army Community and its customs, courtesies, ethic and traditions; adapting civilian education and experiences to the Army environment; performing the critical staff officer skills to work in collaboration with other battalion staff officers and noncommissioned officers; and advising leaders on the impact of religion on the military community and operations.

The U.S. Army Chaplain Center and School, established almost 100 years ago, serves as the U.S. Army Chief of Chaplain’s institutional training base for Army Chaplains and Chaplain Assistants. The mission is to train Unit Ministry Teams — Chaplains and Chaplain Assistants — in safeguarding free exercise of religion for all Service Members and their Families, as well as the provision of religious support and religious accommodation.